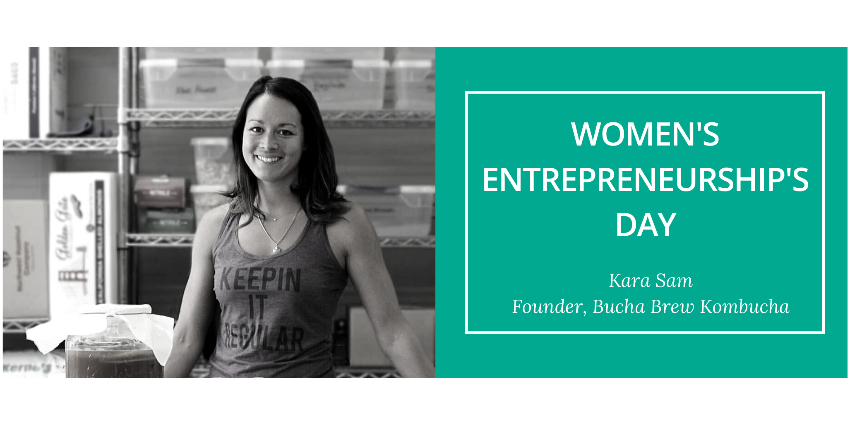 There is a vast amount of research that shows that women have better access to capital via crowdfunding than the more traditional routes, such as Venture Capital. This Women's Entrepreneurship Day, we wanted to interview one of our most recent women-led campaigns that successfully raised capital to grow on FrontFundr.

Kara Sam is the founder and CEO of Bucha Brew, Canada's fastest-growing Kombucha company. She started the company just over three years ago. While in Hawai’i with her newborn, Kara was looking for a low-sugar drink and was feeling bored with water. She discovered Kombucha and started homebrewing. Kara progressed to farmers' markets and is now in Sobeys, Safeway, Urban Fare, Save on Foods, IGA, and nationally with 7-11.

Hello Kara, why did you choose investment crowdfunding to fund your business?

Kara: I was having a really hard time finding people who were interested in investing; I didn't know the best places to look. We had just finished our fiscal 2019, and we finished just under a million in sales. We were a little small for VCs, but not quite seed funding. We were in a funny stage of growth and having a hard time finding people who were willing to invest the amount that I needed. Crowdfunding was interesting because the timing was great; I hadn’t raised money and got 711 and Sobeys at the same time. We went from 300 to 1100 stores over a few months, and to be able to fund all that, I had to find money pretty quickly. On FrontFundr, we could close anytime and do multiple closes and pull what capital we needed to meet our growth needs.

Who is your ideal investor type?

Kara: It's kind of changed over time. When we first started and launched on FrontFundr, I was excited about how anyone and everyone could come in mainly because we wanted to use it as a marketing tool as well. It really worked, I've had tons of people approach me and say they tell their friends to buy only Bucha Brew. That's been really great.  Now we are looking for more of a strategic investor who will really help us with strategy and growth.

Our target market is moms 25 – 45, this group is least likely to have invested before. I found it was a different conversation than I was having with the men. The women were really diligent but had a lot more questions and took a lot more time, whereas men would ask fewer questions. Women wanted to meet and get to know me. It was fun to meet women in the space.

Tell us more about the different questions investors asked you?

Kara: Men asked, let me see your financials, what is the max capacity, how many litres per month can you brew, that sort of thing. Women wanted to know the story, why I ran a business with two kids, working as a single mom, wanted to know more about my past and the reason why I'm doing what I'm doing. Their questions were more to understand my motivation and ability to stick the course.

The Due Diligence process was really amazing because it forced us to get everyone together in one place. I’d never done any financial planning, we had just done a two year plan before. It was interesting and fun and it let me know my business a lot better. I knew my gross margin but that was from my year-end statement. It was good to know ways to get it better. Going through emails to pull all the data and get the documents in one place was great. You guys were super helpful in reminding me and asking what you needed. The backing to know that I was doing the right thing. Doing that on my own, I don’t know if I would’ve been able to do that

I have way more confidence speaking to the back end of my company, and those are all the questions that I’ve been asked. I never realized how creative the financial side can be, doesn’t matter what the numbers say but it matters more what you say about it. When I look at numbers, that’s the answer, but there’s usually more to it than that.

Kara: I haven't raised really before. My ex life partner and my dad funded the start, but we've been just growing organically so far. I got a loan from Vancity, that helped but it was just for equipment, which we had to pay back 75%.

I feel women have a way harder time raising money. The platform was great because I could showcase what we were and who we were. Pitching in person, the questions people asked me were quite a bit different than what they'd ask a guy. It was almost a test to see if I knew the answer, whereas with the guys it's more camaraderie. Of all the pitches I've done, Bucha Brew had the most traction and are actually generating revenue; only one person has invested out of over 60 potential investors. There's still a huge divide between women and men in the business world. It's still 95% men on the investor side.

Bucha Brew has just secured the Canada wide contract with 7-11 and the capital raised on FrontFundr will allow the facility to expand to meet the agreement.