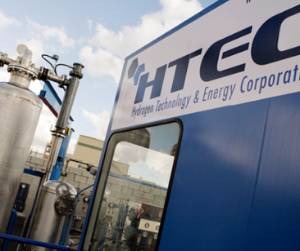 Thirteen years ago, Colin Armstrong joined HTEC’s team as a director and is now the CEO of the Vancouver based company. We sat down with him to discuss HTEC’s FrontFundr campaign, the hydrogen industry in Canada and what the future holds for HTEC.

HTEC was founded 13 years ago. What's the story behind the company’s inception?

There was a lot of excitement about hydrogen in the early 2000s and significant funding available for demonstration projects. We created HTEC to satisfy the demand for clean hydrogen fuel as part of British Columbia’s Hydrogen Highway suite of demonstration projects. Some people might recall these projects being showcased during the Vancouver 2010 Winter Olympics.

HTEC’s first project was to build and operate a by-product-hydrogen purification and compression plant in North Vancouver. This project and HTEC’s involvement in the demonstration fueling stations paved the way for the work we are doing today in BC and elsewhere.

What are the key milestones you have accomplished since the creation of HTEC?

It’s been a long road, with ups and downs along the way, but that’s to be expected when you’re part of an industry working to change the transportation paradigm.

I think the biggest milestone for our business has been developing the expertise and securing the funding required to turn a dream into a reality: building a retail hydrogen refueling network in BC.

In June, we opened Canada’s first retail hydrogen refueling station, in partnership with Shell. The station, on Granville Street in Vancouver, is the first station in a six-station network we’re building in the Lower Mainland and Victoria to support the first 1,000 FCEVs that roll onto BC roads.

So you have been a CEO in the energy sector for four years now. In your eyes, what has changed the most in the industry at that time?

We’ve seen a strong evolution and growth in the global market for hydrogen in recent years with three specific things happening that have taken decades to come to fruition.

First, the major car companies have developed affordable fuel cell electric vehicles. Today, in California as an example, automakers have sold or leased 5,000 FCEVs. There are 35 stations open across the state, with another 29 funded and in development. California’s goal is 200 stations by 2025, and 1,000 stations by 2030 to support a projection of one million vehicles. That’s real progress.

Here in Canada, in 2015, Hyundai became the first Canadian automotive company to offer FCEVs to real-world customers, introducing a small fleet of Tucson FCEVs onto BC roads. I drive one and, like many others, am hoping to see Hyundai’s next-generation FCEV, the Nexo, in the province soon. Toyota has also announced it will deliver 50 Mirai FCEVs to drivers in Quebec later this year and we hope we’ll see a fleet here in BC too.

Second, we’re seeing strong support for Zero Emission Vehicle (ZEV) mandates and Low Carbon Intensity Fuel Regulations in key markets for hydrogen FCEVs. While California has had a ZEV mandate since 1990, Quebec introduced a ZEV standard in 2017, and recent government position papers in BC show strong support for enacting a similar mandate. We’re positioning HTEC to service rapidly evolving markets like BC and Quebec in part because of these policy drivers.

Finally, the industry now has a regulatory framework around safety that makes it possible to bring hydrogen to consumers. That doesn’t mean it’s easy! But this framework supports industry development and growth.

What are your key motivators leading your company?

When people ask me why we’re doing what we’re doing at HTEC, I think it comes down to the fact that we are driven by the global need to act quickly to reduce the emissions impacting our climate.

Hydrogen for transportation offers so many exciting possibilities to reduce our environmental impact. FCEVs can significantly reduce GHG emissions, and other particulate emissions, but don’t require consumers to make any compromises when it comes to range and refueling. It doesn’t take hours to ‘charge’ an FCEV: you can refuel in less than five minutes and travel at least 400 kilometers on a full tank.

What's ahead for HTEC?

The global demand for low-emission transportation is keeping us busy! We are focused on keeping up with the demand to build infrastructure in Canada, and we’re excited to see the Canadian public embracing hydrogen fuel cell electric vehicles and using clean fuel. If they’re filling up at an HTEC station, even better!

Why have you decided to open your raise up to all Canadian investors? The ‘crowd’ as it were.

We talk to a lot of people about hydrogen and feel there’s a real groundswell of support and excitement. Crowdfunding on the FrontFundr platform offers HTEC an efficient and cost-effective way to connect with a large pool of retail investors interested in what we’re doing. It also helps us forge longer-term connections to a community of people looking to both support BC’s strong and vibrant hydrogen and fuel cell sector, and profit from the growing global shift toward low-emission transportation.

If you want to learn more about HTEC mission, you can check out their campaign page here on FronFundr.