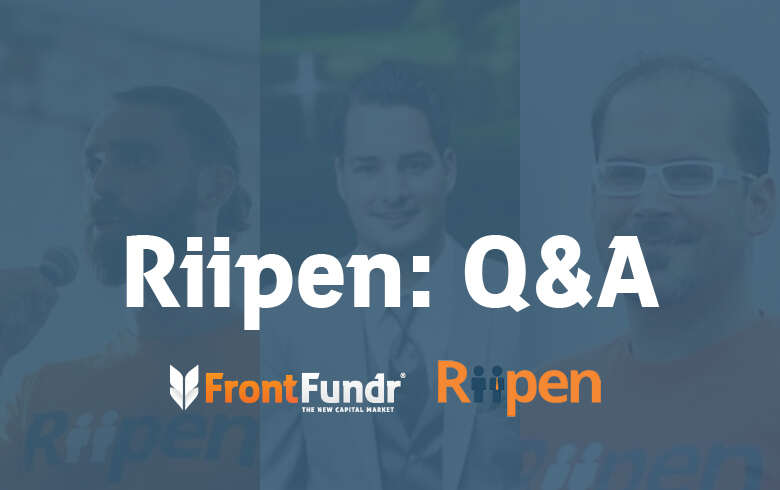 Riipen enables industry value and employable skills to be recognized in the class projects that post-secondary students are doing so that their work is valued for more than just academic merit. The traditional method is: professor creates assignment; student completes it; professor grades it; and then it goes into the trash. Only academic value is recognized through a letter grade. The Riipen model seeks to extract the industry value, and give students the opportunity to build and demonstrate the specific skills companies are hiring for after graduation. That way, graduates are poised to start their careers in relevant jobs, instead of being underemployed and saddled with mass amounts of student debt, like so many recent graduates currently experience.

Recently back from a highly successful three month opportunity in New York, Riipen has an overall funding goal to raise $2 million and is reaching out to the crowd via FrontFundr for part of that raise, in order to give their early supporters and ambassadors the ability to invest in and access shares early on before their expansion throughout North America.

Read our Q&A with co-founder Richard Tuck to learn about the company that’s preparing students for success in the job market.

FrontFundr: Have you raised funds before or is this your first raise?

Richard Tuck: This is our first raise. Riipen has been bootstrapped so far—we’ve been operating on our own capital that we invested, plus revenues.

FF: What has been the biggest surprise to you so far in preparing to raise capital?

RT: As soon as FrontFundr started due diligence we realized: yes, we need all of this. Being so focused on the business, there are certain pieces you just don’t look at until you get serious about raising funds.

FF: What motivated you to raise funds with FrontFundr?

RT: Inherently we have a social mission that a lot of people are really excited about and a lot of people have told us they want to get behind it. This is the natural fit for them to do that—by financially supporting us, they’ll succeed when we succeed. We want to be the next LinkedIn, that billion-dollar company, but for students. We believe we’ll get there, and we want to see the people that supported us early get rewarded too.

FF: What was the first moment you felt like your business idea was validated and that you had traction?

RT: A big moment was when Schulich School of Business at York University approached us. Up until that point we had done proactive outreach to schools, but Schulich came to us and said, “we need you and we see the value in what you do”. Also, once we started to get big clients like Joe Fresh, MEC, and Nestle on our website, and then we started getting students hired, those were all moments where we thought, “this is real, and we’re making a difference.”

FF: What role have accelerators and incubators played in Riipen’s growth?

RT: I could write a book on all of this— they’ve been instrumental in our development and early success. Riipen started when the founders won $10,000 for the business idea through ICE— UVic’s on-campus incubator, then they went into VIATeC, Victoria’s tech hub. Once we moved to Vancouver, we started with Launch Academy, and from there Radius SFU asked if we wanted to join them. Radius told us about MaRS Discovery District’s Impact8 program, which was about to launch an EdTech cluster to help companies like ours scale and attract financing. We applied and we were the first of the eight companies to be selected to participate. From there, Impact8 told us about the EDGE EdTech accelerator in New York. We applied to EDGE and they selected 25 companies, including ours, out of 560 applicants. It was a natural progression from Victoria to Vancouver to Toronto to New York. It’s easier to make these moves when you’re riding the train of incubators, accelerators and co-working spaces. Those networks are invaluable. Now that we are back in Canada, we’ve been excepted into VentureLabs in Vancouver, Ryerson Futures has asked us to join the DMZ in Toronto, we’ve even been asked by CommuniTech in Waterloo to join them, and of course we have an open door at EDGE in NYC.  All of them have strong connections with universities, which is important for Riipen to build out our next iteration.

FF: What would advice do you have for to entrepreneurs when looking to get involved with incubators, accelerators and co-working spaces?

RT: Selection is key. All of the incubators and accelerators have perks and services that are really valuable and will potentially save you a lot of time and money. If one is offering perks that are consistent with your business needs and another is offering perks that aren’t, that’s a big consideration. If you’re going to utilize the credits where you would otherwise have to spend money, that can make a huge difference in your cash flow. And cash flow is key. But, remember that your equity is valuable and don’t give up too much too soon, many of these organizations feel that their biggest value is their programming and that we should pay for their time. It’s not, it’s their network. Some of their programming has the potential to be more damaging than anything. So find out who has the best network, especially internationally.

From Prospect Lounge to Pitch Place, we help startups build relationships and momentum in order to help them raise funds. We support early-stage businesses in their critical stages of growth, and help generate awareness among seasoned investors and the public. To get started with a listing in Prospect Lounge, contact us.