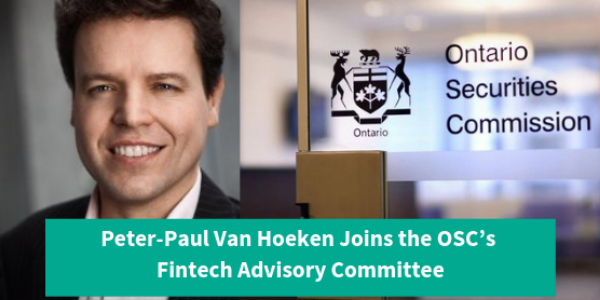 He joins other new members including Brady Fletcher of TMX and notable figures in Canada’s startup community such as Andrew Graham of Borrowell, as well as members of Canada’s Venture Capital community, including Karim Gillani from Luge Capital. The Fintech Advisory Committee advises OSC staff on developments in the fintech space, as well as the unique challenges encountered by innovative businesses in the securities industry.

With the opening up of crowdfunding across Canada since 2015, the opportunities for companies to raise capital have increased and individuals finally have the opportunity to invest in private companies. The regulations for Ontario have not been as straightforward, and the take-up rate by both companies and individuals has been significantly lower. FrontFundr knew, by opening a Toronto office they could be closer to the centre of private capital markets in Canada and all its stakeholders.

For over five years, Peter-Paul has been advocating for accessible and inclusive Canadian private capital markets that ultimately drive jobs and economic prosperity in Canada.

Digital technology is a key enabler for the democratization of funding by and investing in private companies. FrontFundr, a fintech company, has been pioneering investment crowdfunding in Canada and is now Canada’s leading online private markets platform in Canada.