Get to know the man behind FrontFundr!

Get to know the man behind FrontFundr!

Chances are you’re well aware of FrontFundr and our equity crowdfunding platform. But did you know, for example, we also have DealSquare an online private markets platform for industry professionals? Both were created to help fulfil the mission of simplifying Canada’s private markets, and the man behind it all is our founder and CEO Peter-Paul. Here’s a look at what makes him tick.

What was the inspiration behind these two companies?

The idea came from the television series Dragons’ Den. How is that only those dragons in their comfortable leather chairs and a stack of money on their side table can invest in startups? Why not everyone who is watching the program? Why can startups and scaleup companies only ever turn to the usual suspects - angels, VCs and other institutional investors? What if those companies could raise money from anyone who believes in what they’re doing and anyone could become a shareholder in those companies from the very beginning.

Tell us a bit about your background in the finance industry.

I worked for about 10 years in the banking industry in Europe. I worked in a number of different roles in different divisions, from consumer banking and investment banking to corporate business development at the head office. I enjoyed my time in banking, but I knew that I wanted to move on and work in a more entrepreneurial capacity with the ambition to make a change in the finance industry...to demystify the world of finance. The decision to quit my job in banking and embark on a new career path coincided with me and my family jumping the pond and landing in Canada. It was a big and challenging move, but a great personal and professional experience. 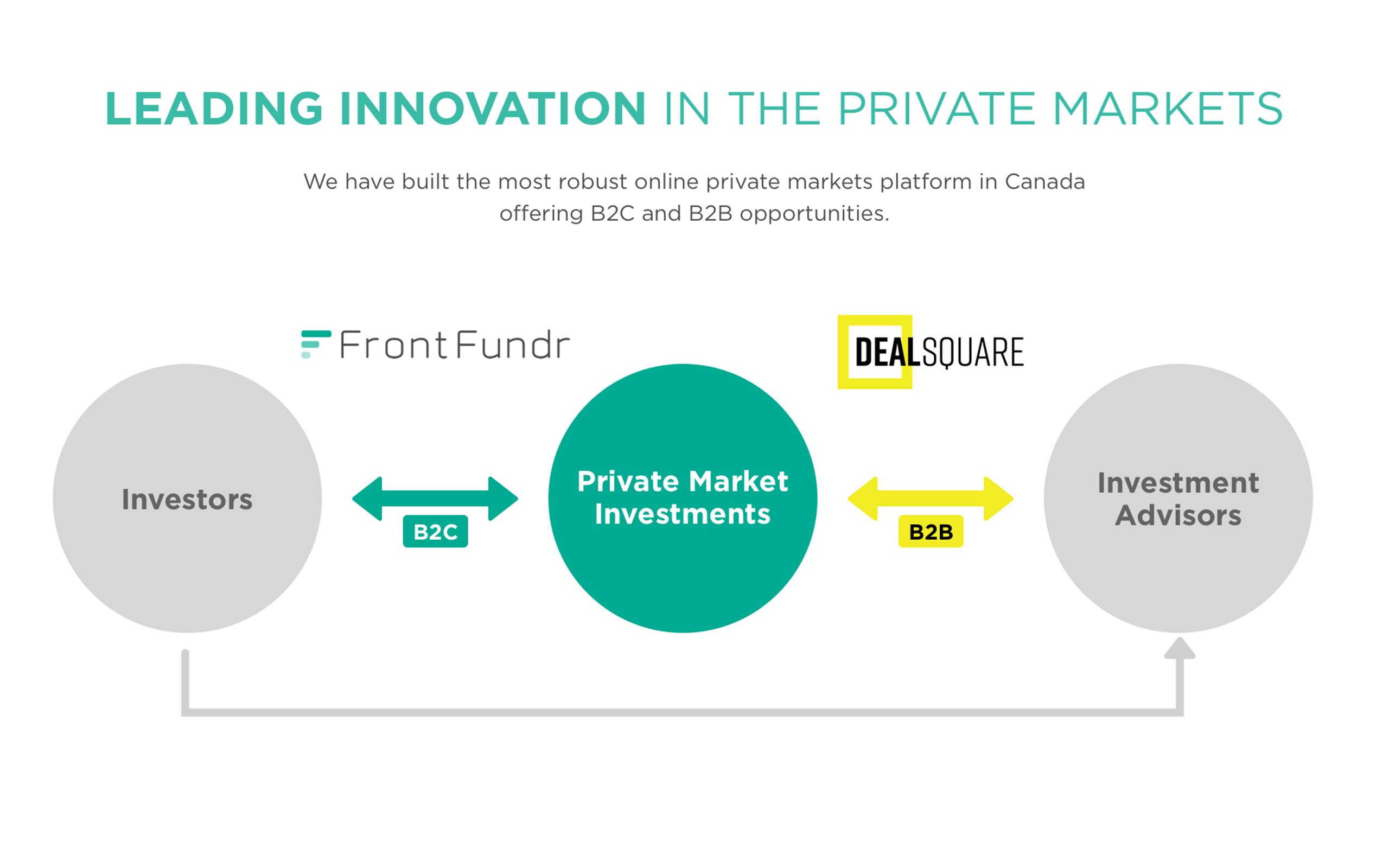 What attracted you to the startup world?

I have always been attracted by building something out of nothing, taking an new idea that can make a change in the word for the better and making it happen. My move to Canada and starting all over again has been a tremendous entrepreneurial opportunity. It certainly was challenging. School of hard knocks. I learned a lot about entrepreneurship, business, people, and perseverance. SMV [the company behind FrontFundr and Dealsquare], being a startup itself, is helping other startups and scaleups to get the finance they need to grow and succeed. That is very energizing and rewarding.

What’s been the most surprising thing about founding SMV?

What struck me is how founding a company, from idea to turning it into reality truly is a journey. It is a process of discovery, gathering information, developing an idea and testing your idea with other people. Some people will say ‘that is a great idea, go for it’ and others, particularly in the industry, said ‘nice idea, but I don’t see how you could make that happen, good luck’. Some of those people became shareholders and champions of the company. Founding SMV was the result of an amazing journey in itself. All experiences and lessons learnt along the way seem to fall in place on the path toward building our company.

And the most challenging?

Being the new kid on the block with big plans to make an impact and change the neighbourhood doesn’t come easy. Pioneering change in the established finance and investment industry that is very closed, traditional and subject to tight regulations, has been and still is very challenging. It became clear how important it is to identify and mobilize those stakeholders that are empowered by, and benefit from, what we’re doing with FrontFundr. I mean the startups and growth companies looking for new ways to raise capital and investors that traditionally had been locked out from investing in them. They are the change-makers who will pull along established players in the venture capital space who may fear losing out in the short-term, but ultimately everyone will win.

Who is someone that has changed your life?

I founded FrontFundr together with Peter Scarth who passed away on November 5th, 2018. I met Peter in the early days after my move to Canada in 2010. He was an integral and important part in the process of building up my life in Canada. We got to know each other well in a short time. Peter was a great guide and motivator to me. He was always there for me to talk to, to share our successes and challenges. He helped me put things into perspective and would often tell me to “dream big” and “hang in there”.

Why is SMV running a funding campaign?

We closed the decade with significant achievements. We are seeking to build on our achievements with our next round of financing to accelerate our growth and work towards profitability. We like to walk the talk, drink our own whisky and raise capital through our own platform. We have done it three times before. This time we also listed ourselves on Dealsquare, Canada’s first fully digitalized private markets platform for investment dealers and advisors. We developed DealSquare in partnership with NEO Exchange, the third largest and most innovative securities exchange in Canada.

What do you hope to achieve as a result of it?

Our goal is to hit the target of $1.5 million and get as many new shareholders on board as possible. We see our shareholders not only as investors that help us fund our growth, but also as our biggest brand champions, people that can help us grow the business by sharing our mission and purpose within their networks.

Where do you see FrontFundr in 5 years’ time?

In other places like the U.K. where investment crowdfunding started five years earlier, it has already become mainstream. 40% of early stage companies in the U.K. raise capital through platforms like FrontFundr. In Canada, it started later and the regulatory environment in Canada is more challenging (we have 10 provincial securities regulators). That said, regulation here in Canada is now moving in the right direction. FrontFundr has been pioneering the democratization of investing in private companies. In 5 years’ time I’d like FrontFundr be the most trusted and recognized online private markets platform in Canada.

Silver Maple Venture’s campaign is now live on FrontFundr. Head over to the campaign page for all the details!