Brewing up a storm - A guide to crowdfunding for B2C companies

Brewing up a storm - A guide to crowdfunding for B2C companies
February 14, 2020

Kara Sam is not your typical founder. She’s a former chef and a personal trainer. She describes herself as ‘equal parts superhero and dalmation’. And she’s more at home on a beach in Bali than a busy boardroom. But make no mistake. She is a founder and a pretty successful one too.

She’s the brains behind Bucha Brew, one of Canada’s fastest growing kombucha companies (kombucha being the lightly fizzy, fermented drink with gut-friendly credentials, and an estimated global market value of $2 billion USD). Last year Bucha Brew decided to run a campaign on FrontFundr as a way to help them expand their business and increase distribution, raising over $400,000 CAD in the process.

We were fortunate enough to catch up with Kara to hear a bit more about why she chose crowdfunding for her business, how the campaign went, and what she’s been able to achieve since.

Even before they turned to FrontFundr, Bucha Brew was doing well. Really well, in fact. Their drinks were already stocked in Whole Foods, 7 Eleven, and several other major chains in the BC area.  Kara was keen to take things up a notch, to make her business a nationwide success. While there was a clear demand for the product, raising the necessary funds to accelerate growth proved less straightforward.

“We’d already tried a few other ways to raise money,” Kara says. “Our business was too big to rely purely on contributions from friends and family and we weren’t quite ready for VCs. FrontFundr was a sweet spot between the two, and what really appealed to me was the speed of the whole crowdfunding process. It’s easily two to three times quicker than any of the other alternatives available.”

“Not only that, I realized this was something we could use as a marketing tool to promote our product and a great way to build up our community. All the people who invested in us are very easy to reach out to, they’re always willing to give feedback. They 100% believe in what we do.”

Despite the obvious benefits, it’s only natural to be a bit hesitant with something new. Even more so when it’s your business at stake. Was there anything that made Kara think twice before running a crowdfunding campaign?

“Not really,” she says. “A lot of people are apprehensive about the number of shareholders they end up having, they’re afraid they’ll lose control of their company. But I did my homework on this, researching things like the Voting Trust Agreement, to ensure I knew all the ins and outs.” 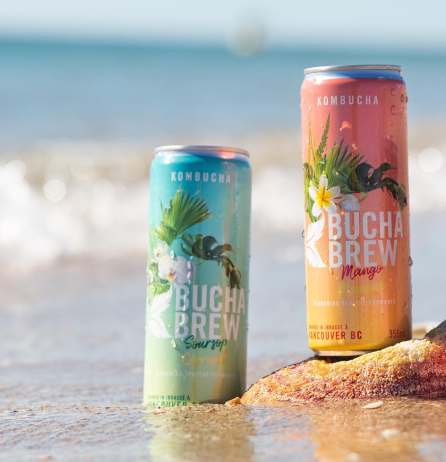 For a lot of businesses, running a campaign can be challenging. It’s often hard to know where and how to reach your potential investors. So how did Kara approach this side of crowdfunding?

“We do a lot of product launches and marketing campaigns for new products and we approached our crowdfunding campaign in much the same way,” she explains. “Being a consumer product, a key aspect of this approach centred on social media.”

“All our social media was 100% focused on FrontFundr. We didn’t talk about anything else. We updated our Facebook and Instagram stories at least three times a day. We used it as a channel to educate people, talk about what we were doing, and how the campaign works. People need to understand what and why you’re doing before they will get onboard.”

Running a successful campaign and leveraging social as the main channel to do it, also increased overall demand for Bucha Brew’s drinks. In fact, the company tripled their production capacity during their campaign to ensure they were able to meet the growing demand!

At first glance, you might think most businesses do equity crowdfunding as an alternative way to raise money. While that’s one of the key benefits, there’s more value to be gained from this process. Does Kara agree?

“Absolutely. This whole process helped me to think of Bucha Brew as a business rather than as a passion project. Sure, I’d started my business, things were going well, but this was a unique opportunity to take things to the next level.”

“Getting all the paperwork together was a big eye-opener for me. It helped me make the switch so that now, when I approach VCs, I am a lot more confident and polished. I’d say a successful campaign gives back to your business in many ways.

Given all these benefits, shouldn’t all businesses look at crowdfunding?

“It depends,” Kara clarifies. “Be cautious about raising money without a proven product. Bootstrap for as long as you can. But once you have something proven, this is a great way for early stage companies to raise money. And for people who are interested in helping out early stage companies, people who believe in what you do, it’s so great to have them own a slice of what you do.”

Thanks to their successful FrontFundr campaign, Bucha Brew were able to raise over $400,000, gathering 94 new shareholders in the process. They increased their distribution and went from a regional network to a national one. They’ve since hired a sales team for Eastern Canada, and have plans to launch new products and new markets very soon. If you’d like to find out how FrontFundr could do the same for your business why not drop us a line?